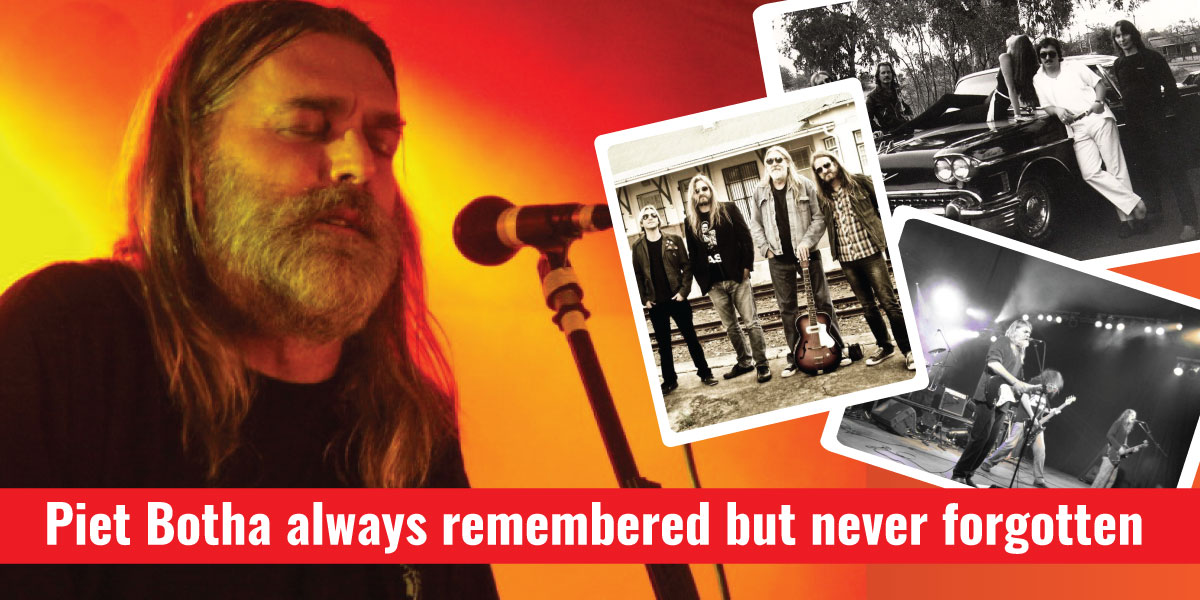 Written by Stephanus Dreyer
Uploaded by
It was a sad beginning of June as South Africa lost one of their true Blues, Rock Legends Piet Botha after a battle with cancer on the 2nd of June. Piet Botha will always be in our hearts and minds with newer to forgotten songs like “Goeienag Generaal”, “Up in Smoke”, “Mama Afrika” and “Midernag Trein” to name a few.

The legendary Piet Botha journey started when he was born in 1955 as the son of former South African Foreign Affairs Minister, Pik Botha.  From a young age Piet Botha started writing songs and forming bands and then Piet got his chance to climb on stage for his first professional gig as an acoustic duo in 1974 at "a local drinking hole" in Pretoria.

From 1981 to 1983 Piet Botha was involved with Wildebeest which was one of the first bands to mix rock music with Afrikaans lyrics and recorded ‘Bossies’, a song about the South West African / Angolan Border War, which was very much a no-no during those Apartheid times.

In 1984 he co-founded the Blues Rock group Jack Hammer which is more than just a band, it is a collective of musicians that has somehow survived the strange machinery that is the South African music industry and produced some sterling original albums over the years. Since their first performance the one constant factor in the band has been the man affectionately known as “Hammer”, Piet Botha.

During 1985, Piet Botha lived in Los Angeles, working construction, and other immigrant jobs by day, and writing and recording by night.

During the 1990’s Jack Hammer opened for Deep Purple and Uriah Heep on their “Masters of Rock” tour and were also privileged to be the supporting act for ZZ Top (one of Botha’s prime influences) on their South African tour.

During 1997 Botha was asked to write and record an Afrikaans album. The result was the all-Afrikaans ‘Suitcase Vol Winter’ album, which is considered a classic by many and a superb example of the groundbreaking Alternative Afrikaans genre.

In August 2003, another Afrikaans album, ‘Die Mamba’, was released and received much critical acclaim, including being voted the best album of 2003 by the influential SA Rock Digest e-mag.

Botha was one of the first musicians inducted into the SA Rock Hall Of Fame in January 2002.

In 2012 Piet cemented his over two decades of friendship and brotherhood with the Akkedis band, by releasing a collaborative album under the name “The Lyzyrd Kyngs”. The name comes from a Jim Morrison poem, “The celebration of the Lizard King”. The weird spelling is a combination of ancient English and a serious reference to Lynyrd Skynyrd, a band that has been a source of inspiration for more than thirty years.

We at RockingSa has a couple of fond memories of Piet Bota one of them is where Stephanus Dreyer won a Jose Cuervo Jacket at Tuks Jool after having a couple of Jose Cuervo shots and got into VIP by telling the bouncer that he is the manager Josef of Jose Cuervo and he is looking for his promo girls. Stephanus Dreyer saw a man sitting by a table and went to introduce himself and low and behold it was the Hammer himself Piet Bota. One of our other memories is seeing Piet bota live with Jack Hammer on stage at Splashy Fen and rocking and moving our bodies to their intoxicating songs.

Piet Botha passing just fell shy from the band Jack Hamer 35th anniversary from which Piet Both was known as the hammer and we at Rockingsa believes that he fought hard to make shore that he would be there for this festive occasion but instead he is jamming with Johnny Cash, Freddie Mercury and David Bowie now.

RockingSA got most of the legacy of piet botha from Piet Botha site so to find out more about this legendary musician go to https://pietbotha.wordpress.com/

Great article! We will miss the old dude.